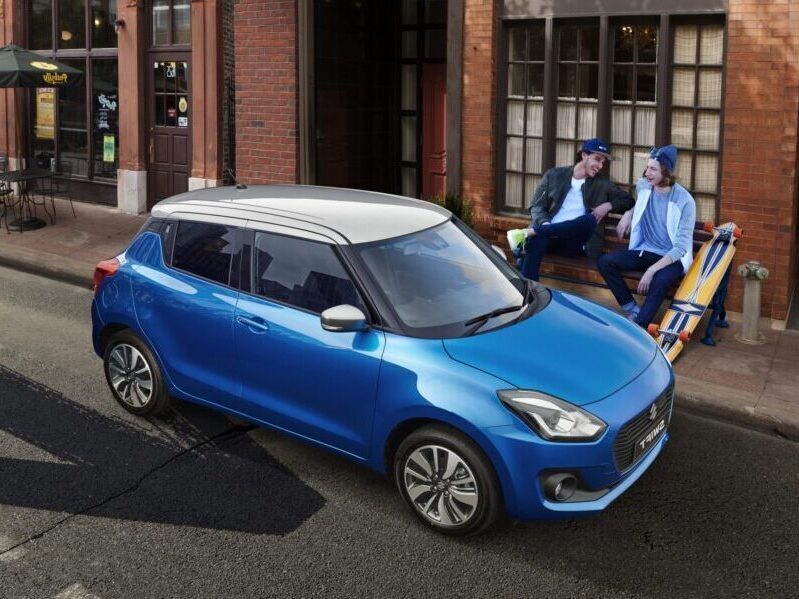 Swift is one of those models with dual identity. It belongs to a Japanese brand, but was developed in European territory and thinking of consumers from the old continent. Nearly four meters long (3,890 mm) he can be considered a city dweller, with ambitions as a roadster and family member.

The four doors and five seats corroborate this, even though the middle place in the rear seats conditions several levels of habitability. In the front seats, both access and habitability are good, and so is the level of standard equipment on the GLX version that we had the opportunity to drive.

At the rear, the trunk expands from 265 to 579 liters, by folding the rear seats. With regard to storage spaces, we liked the use of the front doors, but we considered that other uses were scarce, such as the glove compartment.

With regard to standard equipment and active safety systems, this version stands out for the existence of ABS+EBD, front, side and curtain airbags, the “DSBS – Dual Sensor Brake Support” which includes an exit alert of the lane, fatigue warning resulting from the passage of several continuous and broken lines, and autonomous braking coordinated with the adaptive automatic throttle. It should be noted that associated with the latter, there is an audible and visual alert that is activated whenever the approach to the vehicle in front justifies it.

An instrument panel with a 4.2” display, an intuitive and tactile center panel (similar to a tablet) complement the devices dedicated to information and various settings. The heated front seats stand out for their efficiency. In just over 500 meters, you can feel the heat, both in the “backside” and in the legs.

Accessing the interior of the Swift is an easy task, more to the front seats than to the rear ones. The front seats provide better support and comfort, while the three seats in the rear condition the habitability of the central seat. However, if we want to seat four adults at 1.80 meters, the room rates for the legs and head are close to the limits. However, it will be good not to forget that we are in the presence of a car with less than four meters. And for those who sit behind the wheel, the instrumentation guarantees a lot of information, both regarding the vehicle and related to the trip, while the existence of a central display (tablet type) improves information and provides intuitive operation.

Under the bonnet, the four-cylinder shows off the technology and gives some liveliness, with the electric motor’s 4 hp giving a precious help in transforming gasoline into 90 hp. In practical terms, through one of the functions on the instrument panel, it is easy to follow the intervention of the electric motor and the respective depletion/regeneration of the small battery of 3 kW/h.

At the wheel, some of the advantages of the technologies applied in this Swift of 1,242 cc are evident. The start&stop system grants noise and vibration suppression for a few seconds and at each stop. In just over eight hours of use (08:06:35) the engine ‘shut down’ for almost an hour (00:51:52). The silence of the four cylinders resulted in savings of 0.393 liters of fuel. On the other hand, the engine’s architecture and its management allowed reaching 4.9 liters/100 km at an average of 32.5 km/h on a mixed route and without a motorway (EN+Urbano).

With a wide range of use in the engine, the transmission left us the impression of being well staggered in the five ratios, which contribute to the good performance and range of use of the engine’s speed. Above 2,000 rpm, the engine already reveals some liveliness, which can be exploited up to 6,000 rpm, both in accelerations and in reruns.